10 Tips From Psychology Every Change Leader Should Know 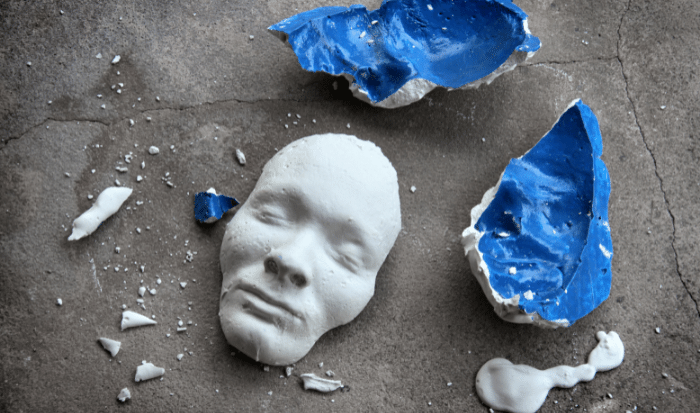 Can people actually change? In psychology, there's a concept called "plaster versus plastic," which was hotly debated by scholars. Are we like plaster in that we “set” at a certain age, and we can't change after that? Or are we like plastic, where we actually can change? After much research and debate over the years, we learned from psychology that yes, people of all ages do have the ability to change.

In addition to applying the Prosci Methodology and ADKAR Model, the disciplines of psychology and behavioral economics offer valuable and sometimes surprising insights, which you can use in your change management work. I try to use them all the time. These are my top 10.

Change is incredibly personal. And, as we know, organizational change is the sum of individual changes and making personal decisions to engage, adopt and use a new way of working. Overlook this critical fact at your peril. As psychologist Carl Jung said, "Even when I'm dealing with empirical data, I'm necessarily talking about myself." For me, this means we must focus on the Desire element of the ADKAR Model in particular. “Why should I change? What's in it for me to change?” Really focus on that. 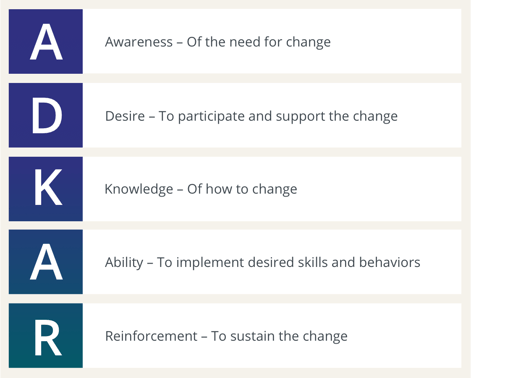 Ultimately, our perception of any experience, good or bad, is based on what happens at its peak and what happens at its end. The rest of the experience is generally discarded. It's a cognitive bias we all have, which the Nobel Prize winner, Daniel Kahneman, found in his research. No matter how rocky the road is in the change journey, we can go a long way to mitigate negative perceptions by ensuring a strong peak and a strong end of a project or initiative.

3. Tragedy of the commons

Individuals tend to act rationally in pursuing personal goals without fully considering that they might be disadvantageous to the system at the collective level. For example, during a heat wave, those people with air conditioners run them at maximum. But that behavior, in turn, may cause the power grid to overload such that nobody's air conditioners work. In change management, this means that although organizational goals may be laudable and desirable, not everyone will subscribe to them and change how they work for the common good. Again, we must focus especially on “What's in it for me?” to help individuals personally to adopt and use the change.

This is about the human tendency to selectively seek information that supports our existing beliefs or initial impressions. And that's most potent with deeply held beliefs. In change management, this applies primarily to culture and communications. Deeply held beliefs about "the way we do things around here" will derail any change. So, cultural analysis and cultural mitigation, especially through leaders, is particularly important to work through this successfully.

As humans, we tend to prefer avoiding losses to acquiring equivalent gains. In fact, studies have shown that losses are twice as consequential psychologically as gains. And it's worse when there's a lot of change going on. Loss aversion can make us respond too quickly to the announcement of a shift in our way of working or even defer our decisions to engage, adopt and use that new way of working. In change management, we try to mitigate that by ensuring that people are crystal clear about “What's in it for me?” again, driving the Desire element of their ADKAR journey through change. We should also employ excellent change management, so people are not overwhelmed by the volume of changes occurring.

Psychology shows us that people are more likely to want to keep an object they already own than they are to acquire the same thing (if they don't own it). This relates to loss aversion because giving up a well-established way of working can feel like a loss. It also highlights that the potential utility of a new way of working really only represents preference—not something from which preferences come. For change management, the word "potential” equates to the future state. So, we must focus not only on the Desire element of the change for individuals and groups, but also ensure that the potential future state of the change is so compelling that people weigh it more heavily than they would losing the old way of working.

This bias is based on the observation that people pay more attention to big numbers than small numbers. In change management, we see this when end users get stuck due to many tactical changes occurring. They might fail to appreciate how all those tactical changes contribute to more significant strategic change. We must make sure that people are not overwhelmed by change and have a clear picture of how the tactical changes contribute to the big picture to the overall change. I suggest we do this by ensuring active and visible sponsorship, excellent two-way communication, full engagement from people managers, and a strong focus on describing “What's in it for me?” (There’s the Desire element of ADKAR once again.)

From a psychological point of view, it turns out that most people don't know how little they really know. And so, when you combine that with anchoring and confirmation bias, it can become a potent source of resistance to change. We need to give people as much information as they need via their preferred channels when they need it. Senior leaders should supply the "high and why" messages, while people managers send the “What's in it for you, what's it to me?” messages, ultimately recognizing that no one knows everything. 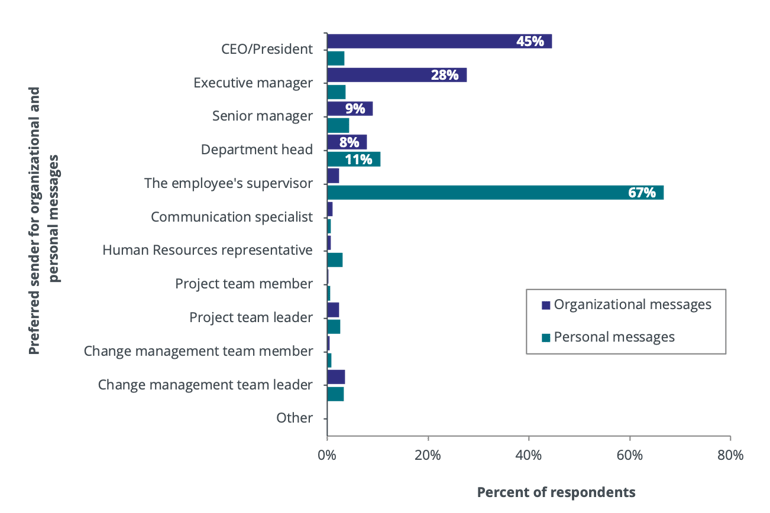 This concept is based on the fact that, for humans, exposure to one stimulus influences how a person responds to a related stimulus later. Our brains are adapted to process information more readily after being exposed to something related. We can use this in change management by developing an all-pervasive culture around the change in question using multiple, frequent and small stimuli related to the change. That might generate propensity to process the change more readily as the project progresses. And research tells us that the use of images, taglines, mission statements, posters, logos, images and branding are all great ways to achieve priming.

This is where people assimilate to group beliefs, actions or ideas they like or trust. For me, that's another way of framing sociologist Everett Rogers’ concept of "watching while being watched." Rogers theorized that people adopt innovations based on where they fall on an adoption curve, starting with innovators then early adopters, and then moving to early majority, late majority and finally laggards. Over time, people choose whether to adopt an innovation based on how they feel about the groups before them—while those behind them on the curve are looking ahead to them. That’s the heart of adoption. Change management needs to fuel this process by simulating identity, or helping people find their intrinsic and extrinsic motivations, with respect to the change. 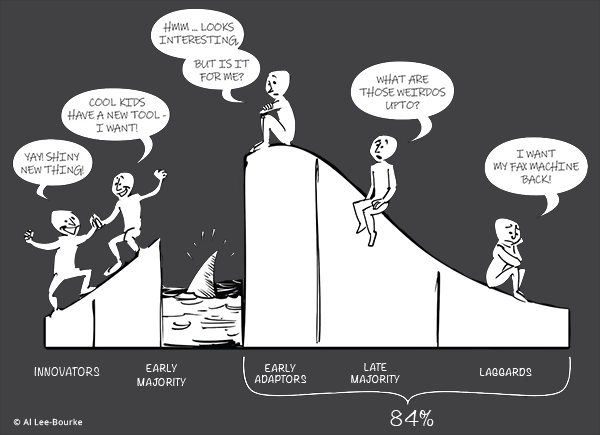 For a long time, psychologists and researchers believed that people could not change after the age of 30. It was widely believed that people were like plaster, and we became set in our ways. That idea was wrong, of course—people can indeed change. And if we apply excellent change management to our organizational projects and initiatives, we have a strong chance of helping people make a personal decision to engage, adopt and use new ways of working. 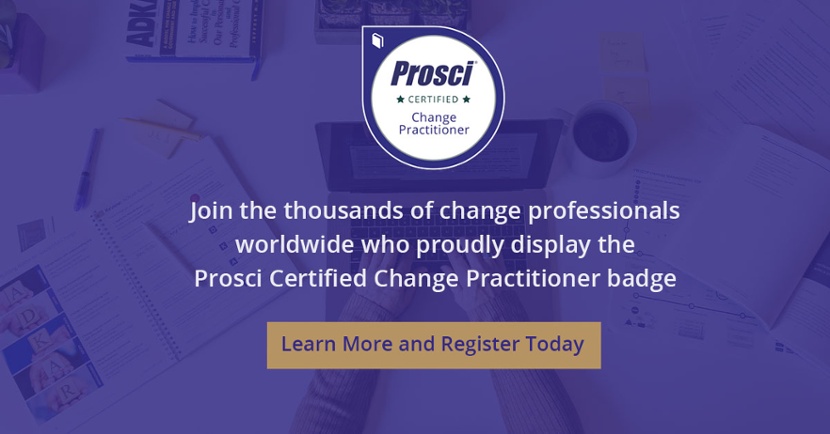 Al Lee-Bourke is a Principal Consultant in Microsoft’s Adoption and Change Management Global Practice. Based near Glasgow, Scotland, Al works with some of Microsoft’s largest customers, as well as internal user groups, to help them generate business value through successful change. Leveraging the Prosci Methodology, he enables IT productivity, enhances adoption and usage of key technologies, coaches leaders and teams, and more. Al is a Prosci Certified Advanced Instructor, Prosci Experienced Practitioner, and Director of the Scotland Association of Change Management Professionals. He is also an avid YouTuber and author of the book, Change Management Field Guide: How it works & tips for doing it.

Keep up with me on LinkedIn 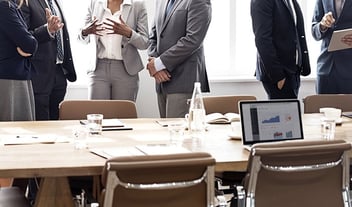