The ADKAR Model: Building Desire for Change with One-On-One Coaching

In our last post, we talked about the importance of building awareness of the need for a change, the first element in the Prosci ADKAR Model. Now let’s talk about the next ADKAR element, Desire.

You may be tempted to skip this article altogether. I get it. I would way rather articulate the business reasons for a change or define a training strategy—that’s a lot less messy than figuring out how to influence someone’s desire to change. Desire is personal. It can be a vulnerable and sometimes time-consuming process. And ultimately, we can’t make anyone decide to buy in. We can only understand their barriers and attempt to remove them. Yet, without people making the personal choice to buy into a change, other efforts to help people transition may be futile. We have to get into the tricky business of building Desire.

There are several ways to influence desire (see the Desire eBook for more suggestions) but today I want to talk about one of the most effective ways to address a Desire barrier: a one-on-one coaching conversation between manager and employee. Let me tell you a story about Resistant Randy.

Resistant Randy is a respected senior analyst on my team who supports the ERP system. The current system was once best-in-breed but is now dated and inflexible. The company’s growth strategy includes acquisition, and the system will make integrating acquired businesses into our operations nearly impossible. Leadership has decided it’s time to evaluate a new system.

Since Randy has been instrumental in developing the current system and processes, he is invited to a discussion with senior leadership about how to move forward. During the meeting, Randy verbally agrees with the new direction. He takes the action items of conducting a SWOT Analysis on the current system and reaching out to his network for recommendations.

Yet, a couple of weeks after the meeting, I notice Randy has not made any progress. This is unlike him. Dragging his feet isn’t Randy’s style.

I pull Randy aside to ask what he really thinks of moving to a new system. Randy hesitates, then explains that he does not fully understand the need to move to a new system. The current system has served the business well, and Randy is proud of that. He also expresses worry about keeping up with the new technology and asks, “What if people stop seeing me as an expert?” Finally Randy adds, as an afterthought, that his mother’s health is failing, and he and his wife have their hands full helping her. He’s just tired and the thought of this major change is overwhelming him.

Randy’s explanation revealed several barriers to his desire to buy into the new direction, and we discussed each in turn:

This is a crossover of lack of Awareness and Desire. I realize Randy wasn’t involved in the preceding discussions about the current system limiting company growth. I took time to discuss this with Randy, and we were able to identify together why the current system would make it difficult to acquire another company. This helped Randy internalize the why.

2. Randy has pride in the current state

I assure Randy that his hard work over the years is not unnoticed or unappreciated. In fact, it is what led us to involve him in planning for the future. Sometimes, people need to be reassured that their work in the current state has been valuable, even if the company is moving in a different direction.

3. Randy fears he will not be as proficient or seen as an expert

I assure Randy that I am confident in his ability to master a new system and commit to investing in his training, so he can continue to act as a subject matter expert in the team.

4. Randy is dealing with an unrelated personal challenge

The personal challenge of his mother’s health is impacting Randy’s ability to process and buy into the change. I thank Randy for sharing this with me and ask if there’s anything we can do to reduce his stress and free up some emotional and mental capacity. He says working from home two days a week would help him greatly. We make the necessary arrangements to accommodate his request.

Now, the reality is that coaching conversations are not always this tidy. This is meant to be an example. Also, a single coaching conversation is not always sufficient to help someone overcome their Desire barrier. Randy may need time to process what we talked about. As Randy’s leader, I will need to keep an eye on the issues we’ve talked about and circle back if I see or sense him withdrawing from the process again. However, in this initial coaching conversation, I have done two things: 1) demonstrated I’m willing to dig into the issues that are holding Randy back and 2) I now have a list of things to be mindful of as we move forward together. I know what Randy’s up against and I can keep those issues in mind as I continue to coach and communicate.

Managers Are the Linchpin

These kinds of conversations can only happen with the trust and mutual respect typically found in a manager-employee relationship. In change initiatives, we cannot rely on the project manager, change manager or even sponsor to have these connections. We really need people managers to be effective coaches of change. They must be skilled at having conversations that reveal the barriers to change and empowered to take action to remove those barriers.

Consider how you leverage managers as coaches of change. Do your people leaders understand their role in building Desire? Do they have the tools and ability to identify and remove barriers? Building Desire is tricky business. Equip managers to coach their employees through their barriers to Desire, and you can greatly influence this requirement for individual change. 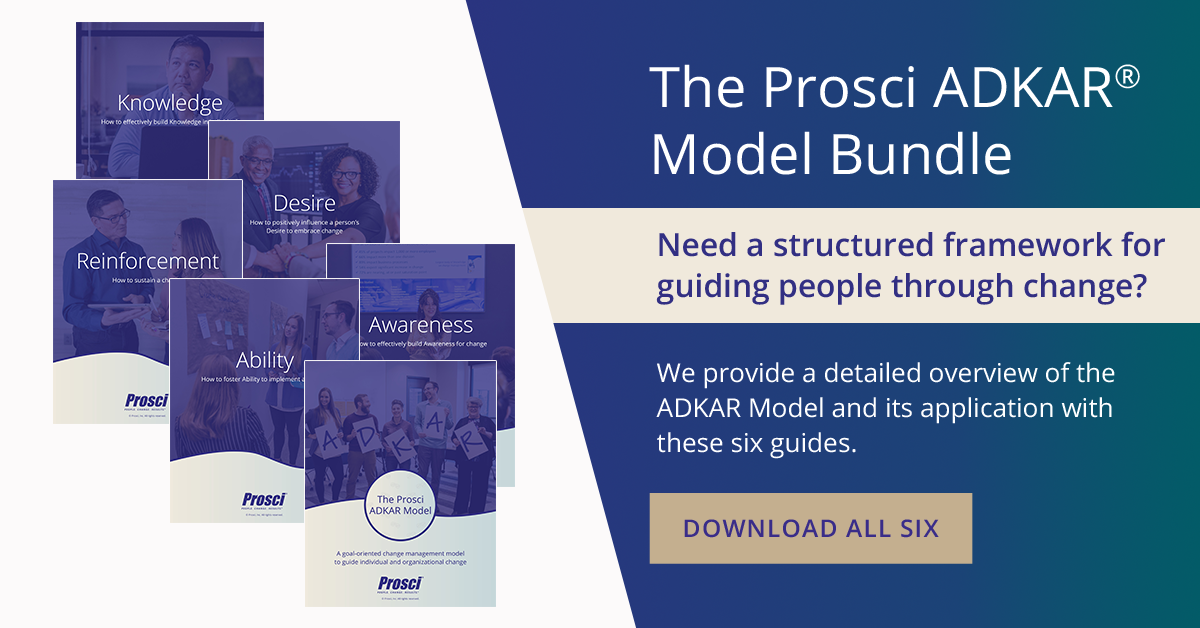 Susie Taylor is a passionate advocate of personal and organizational change. As a former Change Advisor for Prosci, she partnered with organizations to implement change management strategies that drive adoption and results while fostering a positive employee experience. Today, Susie serves Prosci as the U.S. Chief of Staff. She has a master's degree in applied positive psychology from the University of Pennsylvania, where she has also served as an instructor.

Keep up with me on LinkedIn

How to Effectively Build Out a Role Roster for Change